Liz's legwarmers are done! I'll deliver them to her later today and, provided she agrees, post a pic of her in them.

The kids are horribly, heavingly ill and I've done more laundry today than I normally do in a week. And while I'm whining, I'd like to know at what point my father thought it was a great idea to feed my only non-vomiting child virtually all the macaroni and cheese he was physically capable of consuming? "Mom, I ate my Mac & Cheese and then I ate Daniel's and then I ate all of Gracie's!" has been added to the list of infamous quotes. Try cleaning that up at 1am.

Cheerier note: I'm taking a night off in a few weeks to go see Ray Lamontagne at the Colonial Theater. Ideal for a little breather in the midst of the holiday season and I'm going by myself. Need the quiet time.

Josh's socks are next on the to-finish list since I'll probably end up sending them inter-office mail (there's a fine abuse of company resources) & that takes a bit of time. I'm going to ask Kat if she wouldn't mind winding Eric's slipper yarn this weekend. They're DK on #6 DPNs and should work up at a decent rate. And then there's a sweater, though I'll think that'll be more of a New Year's gift. And a few hats. And scarves. And 3 1/2 weeks til Christmas.

You're, um, going to ask me? Hah. Do you work tomorrow? I can get it then and bring it back Saturday. Or you can give it to Cory on Friday, and one of us can bring it back Sunday. Whatever.

nothing like a carnival of vomit. you have my sympathies. 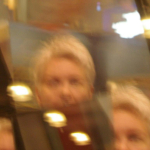